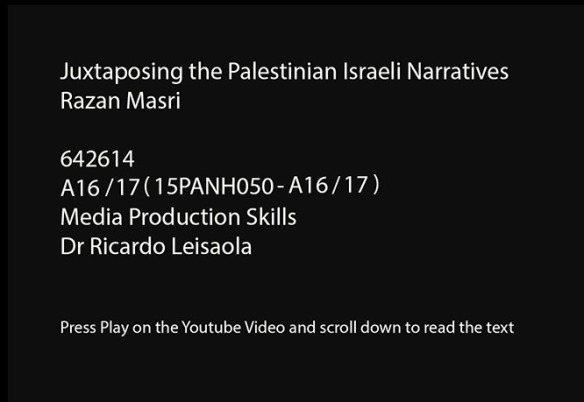 The following video is only for background music. Please press play on low volume as you scroll down to read the text.

This is virtual exhibition. It will include an essay, two photograph collections, and two short videos (one is 3 minutes long, and the second is 4 minutes long). They are all included in this post. All you have to do is scroll to understand the complexity between the Palestinians and Israelis.

“As competent speakers we are aware of the many ways in which linguistic exchange can express relations of power.’ John Thompson opens Pierre Bourdieu’s book ‘Language and Symbolic Power” to what I find to be a profound statement (1992:1). In it, he introduces explicitly what Bourdieu tries to tell us about relation power between opponents. How language is a social setting. What you say and to whom and how you say it, matters. How language exchange, play a vital role in social construction. How agents interact linguistically influencing the most insignificant interpretation of social relations, and understandings through reproducing linguistic formation in the field of politics (2). In my work, I have been wanting to juxtapose competing narratives by the ongoing Palestinian Israeli conflict for so long. Noticing the complex narration both sides narrate that differ in transition and formation, attracted my attention and triggered my curiosity to witness the visibility to social construction. The familiar ring discussed in the book of Language and Symbolic Power “individual versus society, action versus structure, freedom versus necessity (11)” are all explicitly performed by both the Palestinian and Israeli subjects. In my work, I aim to bring together the layering of events constructed, that have imposed an opposition in experience between people that have been separated through political identification (Gandolfo, 2017:196,206). Palestinian versus Israeli narratives, have been conflicting for over decades. The result is, three generations that live side by side in hatred and enmity. The production and reproduction of opposing narration have manifested a complex relationship that shaped a thick line of separation produced by “war, dispersion and traumatic loss (Slymovics 1998:xiv).

Through my ethnographic research, that was conducted in three different countries (Jordan, Palestine/Israel, Lebanon), between various cities, villages and refugee camps, I have decided to focus my interviews with the elderly. The people who have survived and witnessed and remember what happened during the year 1948. The year Palestine was transformed, the year one land was divided, the year a home for the Jewish people was fabricated, and the year that created one of the largest number of refugees until this day. Israel, today, is what many people refer to a land, that was once confiscated from many Palestinians (Peteet, 2005:viii). Many Palestinians were made refugees, or are living in diaspora around the world narrating their stories of displacement.  Displacement, have played an important role in the construction of both narratives of the Palestinians and Israelis, whom have been displaced and placed in similar and differing settings, to create an ethnonational, neocolonial state formation (Peteet, 2005:1). Bringing Israel as an example, Peteet further explains that to claim all histories to be constructed can be problematic. She clarifies right after that many historical claims are embedded into the conscious of many, making it easy to automatically reject “the other” historical claims. Thus, therefore underlines the political power, that enables one narrative to overshadow the other through identity formation (4). Like the theory of practice by Bourdieu, who brings about the understanding of the ‘habitus’ concept explains the “set of dispossessions which incline agents to act and react in certain ways (1992:12)”, produced through childhood training and learning experiences making the historical claims embodied into the body like second nature.

Juxtaposing the Palestinian and Israeli narratives through photographs and short videos, brings about the translation of their symbiotic dispossession into picture. The Nakba; that stands for the day May 15th 1948, when 750,000 Palestinians were expelled from their homes, to be replaced by 600,000 new arrivals of Jewish immigrants; is the same date commemorated asymmetrically by both the Palestinians and Israelis, making the former in despair and agony for their losses from homes, and expulsion from their lands and right to nationality, while the latter celebrates the year the state of Israel was established, referring to it as their year of independence, for creating a home for the Jewish people (Hammer and Schulz, 2003:34, Said, 2000:183). The following commemorations have included the narration of individual experience to generations, reliving and reimagining one event with two constructed and separated communities. Through ethnographic research, video interviews are juxtaposed, to deliver a picture that was once heavily divided through layering, now aligned and configured. Together, the counter sides of narratives, “the material, the symbolic and the physical”, were used to put the pieces together to highlight the difference in construction, to help reshape and reimagine what has been omitted, and what has been replaced in both juxtaposed narratives of memory, experience and new identities (Gandolfo, 2017:206). In this work of juxtaposition, we begin to live the experiences of one another, understanding Bourdieu’s subjectivism “a more or less adequate form of knowledge about the social world (1992:11).” Through intersecting both narratives, we begin to see the framework of construction that produced the line of separation between two communities who continue to live side by side without fully comprehending the full picture.

The study of history is based on memory, and without memory, the question of identity, nationalism, power and authority will be neglected and absent from structuralism. Through memory, the understanding of the invention of tradition is fundamental to constitute what one memory is submerged with the national identity of tradition. One requires a “coherent identity, a national narrative, a place in the world (Said, 2000:179), to be able to compete in narrative, that is both organized and structured. To understand this, is to understand what it takes for two communities to be split through construction of identification and formation of rooting and uprooting power relation, that distinct their nature from culture, rejecting the primordial to situate new identities (Brettell, 2008:136). To conclude, in my upcoming work, both narratives have been juxtaposed to deliver a new sense, that can only be explored through media, and through editing the layered construction into a work of art that can be both observed, and investigated.

This part of the exhibition, consist of portraits of the interviewees. Thirteen out of eighty six were selected to take part of this exhibition. The message behind this portrait display, is to introduce the participants without their identification. To try to observe their nature before the intervention of boarder zones, nationhood, passports and citizenship. Feel free to click on the images to enlarge. 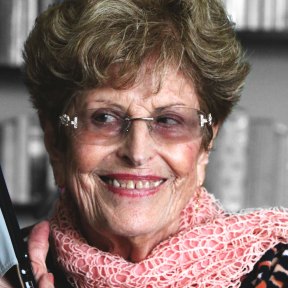 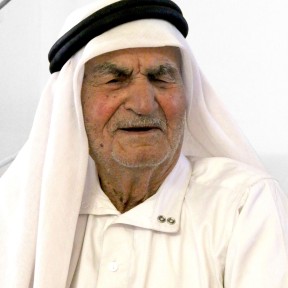 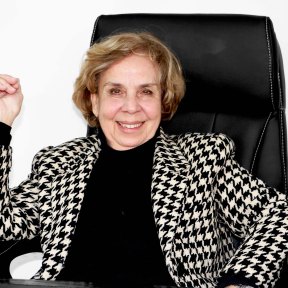 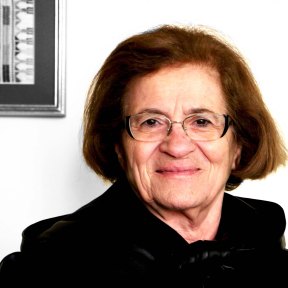 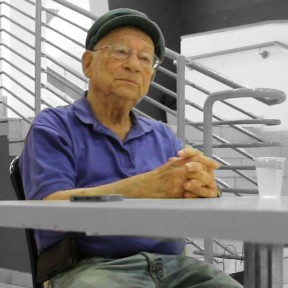 The second part of the exhibition, consist of the same portraits of the interviewees. Only in this collection, they carry their identity that formulated their memories, ideas and narratives.

Born in Yafa, Palestine. Lives in Kuwait. Palestinian with a Kuwaiti passport. 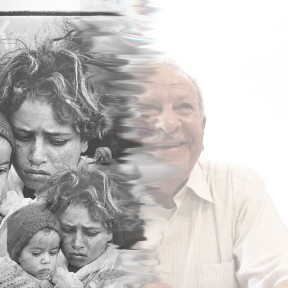 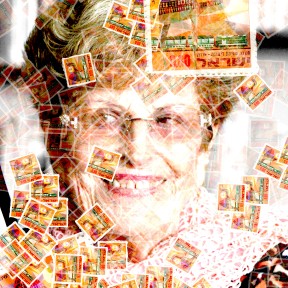 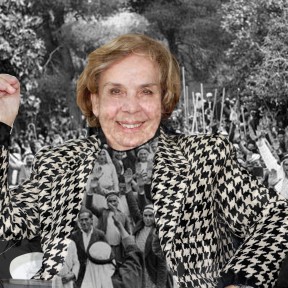 Born in Tabaria, Palestine. Lives in Amman, Jordan. Palestinian with a Jordanian passport.

Born in Nahf, Palestine. Lives in Nahf, Israel. Palestinian with an Israeli passport.