One upon a time, there was an anthropologist who discovered a lost tribe living far from civilization. The people of this tribe were friendly and kind and seemed very wise. In spite of the fact that the man’s inner confusion and unhappiness was disturbing to their harmony, they accepted and made him feel welcome.

He befriended one of the inhabitants of a small village. One day this friend took him to the top of a high cliff overlooking a fast-moving and tumultuous river with a small island in the middle of it. There was a calm, mysterious beauty about the island, but it seemed impossible to reach. Dangerous currents and whirlpools swirled around the island, and there was no bridge from either shore. The water looked too dangerous even for boats. The man gazed for a long time at the island and was curiously moved; he felt that it was his destiny to visit this island.

After a time, another man climbed down the cliff over a barely visible path and stood quietly on the edge of the shore. Eventually a rainbow appeared and seemed to make a beautiful bridge from the shore to the island. The anthropologist was amazed when the man on the shore put his foot on the rainbow and crossed over to the island!

“How did he do that?” he asked his friend. “It is very simple. You just need to know your color. Put your feet exactly on that color, and you will be able to cross over.” The anthropologist was very excited because he thought he had found the answer to fulfilling his destiny and visiting the island. He said to his friend, “You are a very wise man and surely you can tell me: what is my color?” His friend said that that was not possible. “The color is inside you, and only you can discover it. However, I can help you to find the way.”

The anthropologist was impatient and kept asking “How? What must I do?” His friend explained that he must study, read, and meditate and that he would bring him to other wise people who could guide him, but he said, “Only you can find your color.” 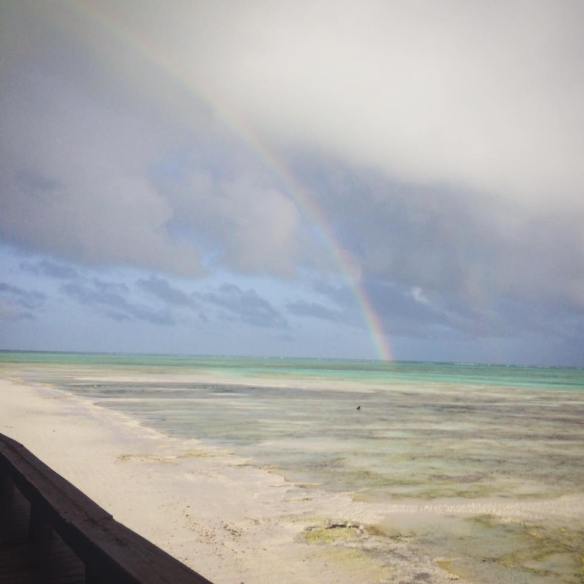 And so the anthropologist worked with the wise people of the village, studied and meditated, and after many, many months, he felt he was ready to try to reach the island. With his friend, they climbed down the cliff path to the edge of the shore, looked across to the special, magical island, and waited patiently. Soon a rainbow appeared and made a bridge to the island. He put his foot on the color that he recognized as his and, yes, he crossed the river on that rainbow to the island of his destiny. He spent many days exploring the island, finding it full of marvelous colors, the colors of all the wise people who have visited before him. He finally understood that he had to leave his color here on the island, that very special and personal color it took him so long to find. But when he left, he knew that he would take away with him a little bit of the color of each wise person who had come before him.

Now he is truly finding harmony for himself and learning what wisdom is.

Adapted from a story by Patrick Condamin